Among all the gurus of vaastu shaastra, one was known as ‘Vishwakarma’, he has described about Vaastu Purusha in his approved grantha named ‘Vishwakarma prakash’-

In Tretayuga, the Brahma ji had created a giant (huge) purush on third day of krishnapaksha in bhadrapad; by lookin 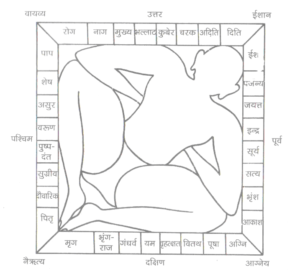 g who all the Gods had been feared. Then, all the Gods, after talking with Brahma ji, had pushed him on the ground and sat on him. After that, that Vaastu Purusha said to Brahma ji that what I did with these Gods. The Brahma ji replied that you remained like this, now all men will make the main gate of their house in east direction and worship you before entering in the house. If they would not do like this, you will have full right to become angry on them and they will be died along with facing poverty.

Thus, it is very important to fit main gate of the house and make arrangement for worshiping of Vaastu Purusha on this main gate be 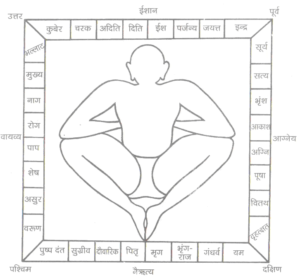 fore constructing house. In addition to it, whenever you organize religious activity, you must need to give aahuti minimum 5 or 11 times in sacrificial fire with the master’s name of the house.

Location (situation) of Vaastu Purusha in land of house–

Vidisha’s land is the land where direction goes on going from one place to other. Few piece of land is not in proper direction. Due to having direction towards corner, the directions (north, east, south and west) are come on the corner and their arms are come towards north-east, south-east, north-west and south-west, etc. corners. But, it does not change the position of Vaastu Purusha. The head of Vaastu Purusha will be towards north-east corner and both his feet will be towards south-west corner. But, due to decreasing up to 30% of the length of Vaastu Purusha from his head to feet in the house of vidisha land, his beauty and gentleness are ended. He will keep on going from one corner to another of the land affected by directions as well as the place affected by the directions too will be limited. The place affected by corners (north-east, south-east, south-west and north-west) will be expanded much. As a result of it, few types of problems may come in the structure of house, because the house will have extra space for kitchen, pooja ghar, dressing room, store room for keeping tools or machines, etc. but, it will have little space for bed room, dining room, study room, guest room, etc. therefore, map for house on vidisha plot should be done through an expert and experienced architecture only. In given figure, vaastu purush has been showing on vidisha plot.

Restriction of the origin of Vaastu Purusha–

The writer and creator of Vedic literature has made every type of works as an important part of life by connecting with religion according to science and nature. Indian culture has been coming due to only this property. Many types of proves and 2-3 restrictions are also very famous about the Vaastu Purusha of house.

All the scientists would not adopt this thing completely, but will believe surely if it is considerable. It can be said like this that there is no doubt that there is a supreme power working in this world that controls everything, it is not other than almighty God. A famous scientist named Albert Einstein has also described about it after studying human beings, subject and his brain. Thus, the God is the creator of whole this world and controls it. A things which is invisible and due to presence of which human beings or any creature of this world are considered as alive, is known as soul. This scientist accepts it as purush in respect of only human being. Like this, another thing that creators this world which has been creating and destroying again and again, called ‘Nature’ by Indian philosophy, it is known by scientists as subject as well as they have also said in this sense that the things created by nature can not be destroyed by any way. Like this, it seems that this great scientist has also proved Vedic Vadgayam. It means that just the God is brain, soul is purush or human being and just the nature is subject. Indian philosophy believes that the God, soul and nature walk together. But they are different to each other in characteristics. By the sachchidanand name of God, all these three powers always living together can be described by following ways-