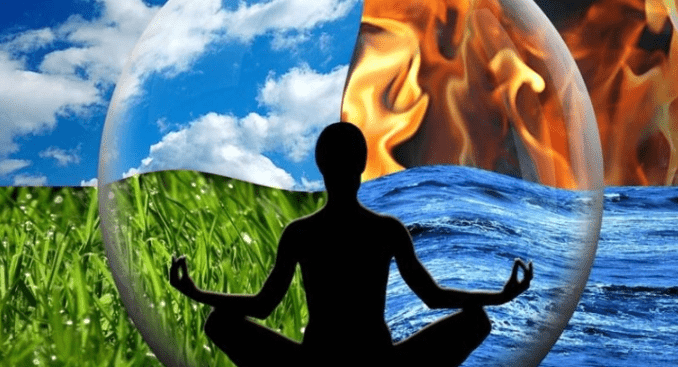 All types of creatures and the buildings constructed by us on this earth have been made up of just these elements. No any creatures on this earth can remain alive on this earth without these five elements (Panchatatva). Interdependence and internal reaction of these powers (elements), which are against to each other and have repulsion nature as well as acting of an invisible equation in between them, etc. are very far away from human mind. One may do his work and made his living place according to his own wish, but he would never be able to control the nature and her powers that influences on his life directly.

It is an unlimited area very far away from the earth in which not only our solar system, but the entire galaxy is present. The powers generated by its affects are- sky, heat, gravitational force and its waves, magnetic field and other. Its main characteristic is sound (word).

The earth’s atmosphere is surrounded it up to about 400 km. It consists of about 21% oxygen (essential for life), 78% nitrogen, carbon-dioxide, helium, other gases, dust particles, moistures and vapor in few parts. Human beings, animals, plant’s life and even fire depend on them. Its characteristics are word (sound) and touch.

It represents light, fire’s heat, electricity, heat of volcano, fever or temperature, energy, day and night, weather or seasons as well as these types of other aspects of solar system, excitement, hard work and emotional power. Its main characteristics are – word (sound), touch and shape or size.

Rain, rivers and sea represent it. It is found in the forms of liquid, solid and gas (weight and cloud). It is the combination of both hydrogen and oxygen in the ratio of 2:1. It is inactive in reaction completely. It is found in all types of lives on this earth in appropriate amount and its main characteristics are – word, touch, form and taste.

The earth is the third planet from the sun. It is like that of huge magnet whose beauty centers are known as North Pole and South Pole. Its magnetic part and gravitational force influence all the living and non-living things. It has been tilted on its axis at the angle of 23½° which is responsible for the summer solstice when the sun is on the north of equator and the winter solstice when the sun in on the south of equator. The earth rotates on its axis from west to east direction causes day and night on it. It takes one year (365 days) to complete one revolution around the sun. ¾ part of the earth is covered with water and ¼ of it is land. The main characteristic of it are – sound (word), touch, shape, taste, etc.

Among these five elements, man and his living and working places, there is external, internal and deep relations found. One should improve his conditions by constructing his house properly after understanding the affects of these five elements. The place, condition and arrangement of the house influence the people living in such house and the ancient grantha (books) named Vastu shastra studied generation to generation is fulfilled with such types of properties.

In samarangan sootradhar, the author describes about pouring light by following way in Vastu shastra like-

In Vishwakarma-Vastu shastra, following has been described about them-

It means that the entire world gets good health, happiness and prosperity by Vastu shastra. One gets divine power through this shaastra. The information about architecture and the existence of this world are similar to each other. The followers of Vastu shastra do not get only worldly happiness, but also feel divine pleasure.

Panchabhutas (Panchatatva- five elements) and place of construction- Vastu shastra is mainly known as the art of building good house so that ones could keep himself with proper way and could get maximum benefits from these five elements and the magnetic field present around the earth. Balance environment can be established completely by the scientific use of these elements that helps in getting good health, wealth and prosperity. Modern scientists know about the sources of energy that any shape centralizes the energy of earth and universe which is either useful or harmful for him. It is obtained from our ancient granthas (books) that our saints have proper knowledge about getting power from these sources. Therefore, Vastu shastra has been described as the essential subject for selecting place to construct house, because the place of constructing house represents an unstable form, it will spread positive or negative energy according to its shape, quantity, direction, ratio and the condition of place opening towards outside.